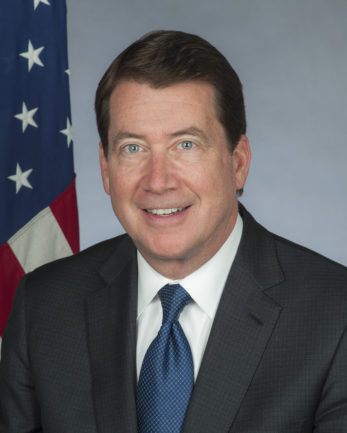 Ambassador Hagerty was nominated by President Trump on March 27, 2017 and sworn in as the 30th Ambassador Extraordinary and Plenipotentiary to Japan on July 27, 2017.

Prior to his nomination, Mr. Hagerty served as Director of Presidential Appointments for the 2016 Trump Presidential Transition Team while on a leave of absence from Hagerty Peterson & Company, a private equity investment firm of which he was a founder and Managing Director. When he assumed his official role, Mr. Hagerty resigned from the boards of three publicly-traded companies as well as from his role as co-founder of the committee that is bidding to bring a Major League Soccer franchise to Nashville. Mr. Hagerty began his professional career at global management consultancy Boston Consulting Group, including three years in Tokyo, Japan. He subsequently served as CEO and board member of companies with extensive operations in Asia and Europe.

In addition to his private sector experience, Mr. Hagerty has been a public servant at both the federal and state levels. As a member of President George H.W. Bush's staff, he served on the President's Council on Competitiveness with a portfolio that included international trade. From 2011-2015, Mr. Hagerty was a member of the Governor's Cabinet and Commissioner of the Department of Economic and Community Development for the State of Tennessee. He was also responsible for the Tennessee Film, Entertainment and Music Commission and helped bring the television series, "Nashville" to his home state.

Mr. Hagerty graduated Phi Beta Kappa with a B.A. degree from Vanderbilt University in 1981. In 1984, he received a J.D. from Vanderbilt University Law School, where he was an Associate Editor of the Law Review and a Wilson Scholar. He has worked extensively on behalf of the Boy Scouts of America, including as Chairman of the Executive Board of the National Capital Council and Board member of the Far East Council when he lived in Japan previously. He presently serves as honorary President of the American Chamber of Commerce in Japan and as honorary President of the Tokyo American Club. He is married to Chrissy Hagerty, and they have four children.

This is the official website of the U.S. Embassy and Consulates in Japan. External links to other Internet sites should not be construed as an endorsement of the views or privacy policies contained therein.